Change today is happening faster than ever before. We are overwhelmed by new technologies and an excess of information, and we feel that we and what we used to think of as society
are being suffocated. Those who drive this change pursue primarily two goals: profit and power. They lure us with clickbait and abuse us as a data pool, reducing our existence to one of human resource and consumer. In doing so they threaten our democracy, our diversity, even our humanity itself. It doesn t have to be like this, thinks humanist and entrepreneur Christopher Peterka. Instead of basing our ambition on purely economic yield, he pleads for a radical new dialogue about being human: who do we want to be? How do we want to live together as a society? What meaning is our ambition meant to have? We have to consider these questions afresh, because if we don t do so, others will. But this means leaving behind short term solutions, and taking a stance against the current system to throw off the shackles that tie us down.

Your Choice is a call to action that encourages us to challenge the status quo and to bring lasting change as progressive optimists. Order now.

“We must strike a harsher chord with the major companies.” 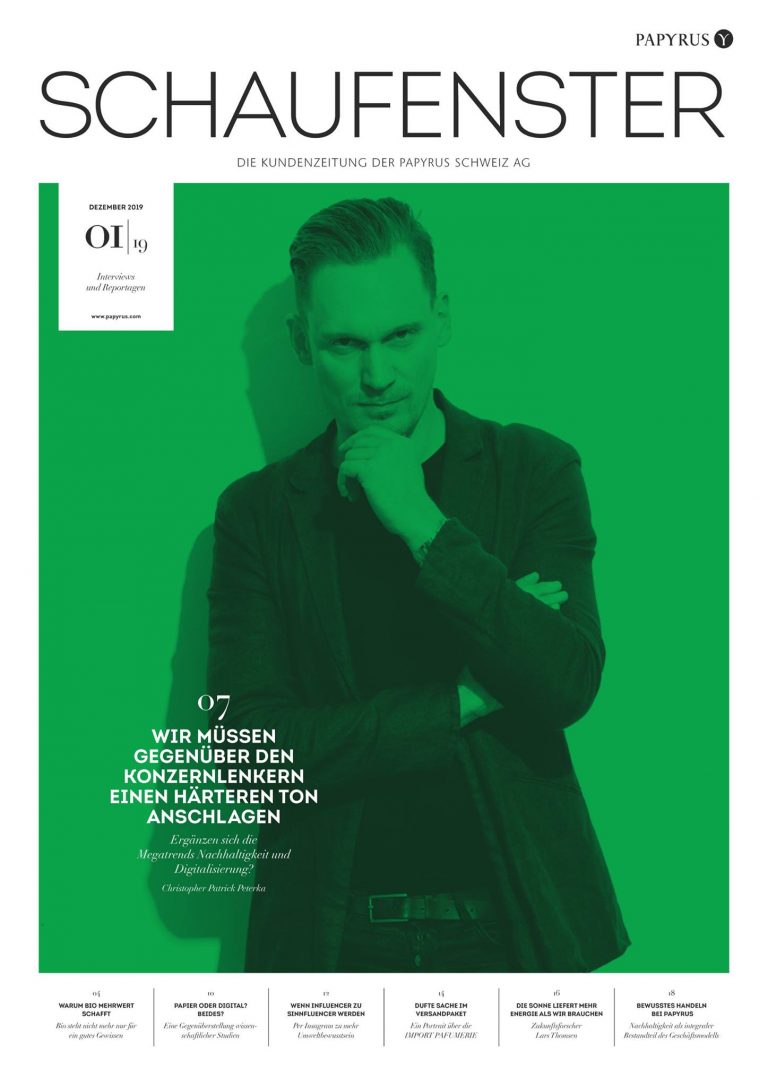 Is there a lack of global rules on the Internet?
How does man remain the ruler of technology?
Why is China missing from the D9?
Who will save the world and get climate change under control?

In the current issue of the Papyrus Schweiz AG customer magazine, Christopher Patrick Peterka answers questions in an interview with Kai Landwehr, Head of Marketing & Media Spokesman at myclimate.

(This article is in German.) 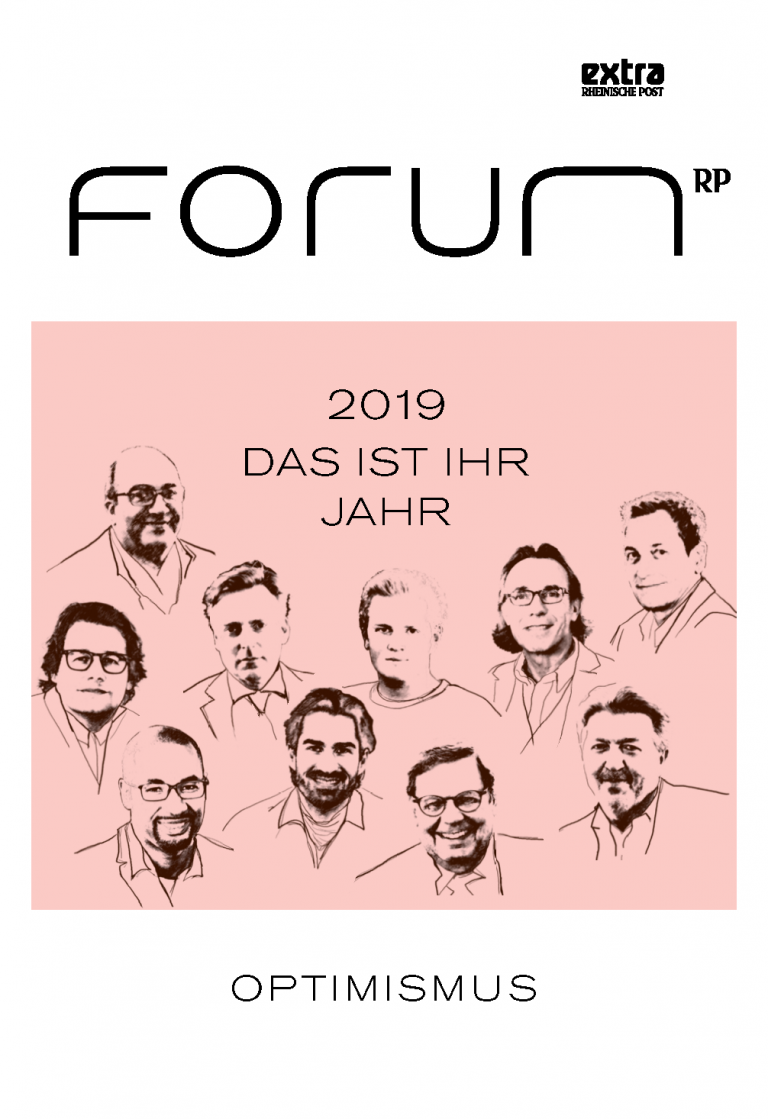 What does the future hold for us? And do you look forward to it optimistically?
Optimism was the topic of the last Rheinische Post Forum, which took place in Düsseldorf at the end of December 2018. A total of 23 high-ranking personalities from the worlds of business, culture, medicine, sport and the media impressively described from their lives how they managed to overcome crises with an optimistic attitude.
Future expert and futurist Christopher Patrick Peterka stresses that we should face developments with optimism:

“In the not too distant future, machines will be so clever that they will make themselves better. Perhaps this will happen just in time for machines to be able to reverse man-made climate change.” 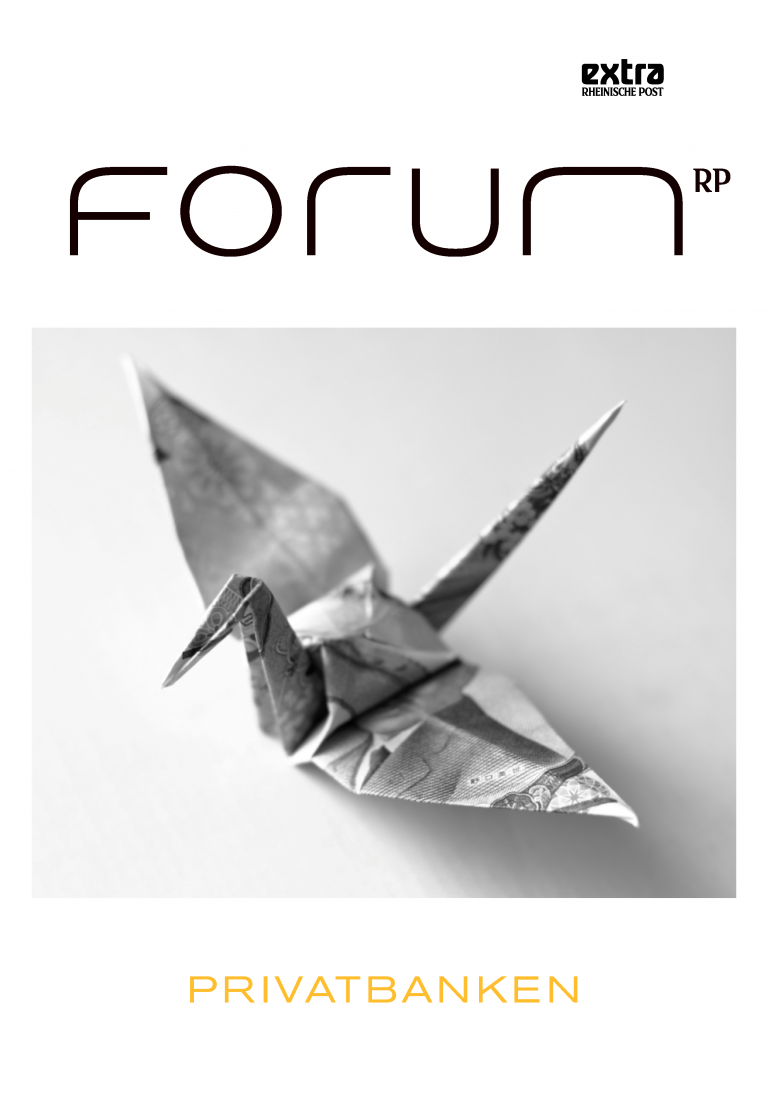 FORUM is a concentrated load of inspiration – from people for people. The Forum is where those who think ahead and shape the future together with their customers meet.
This time the special supplement of Rheinische Post is dedicated to private banks and investment. And this world is also becoming more digital. 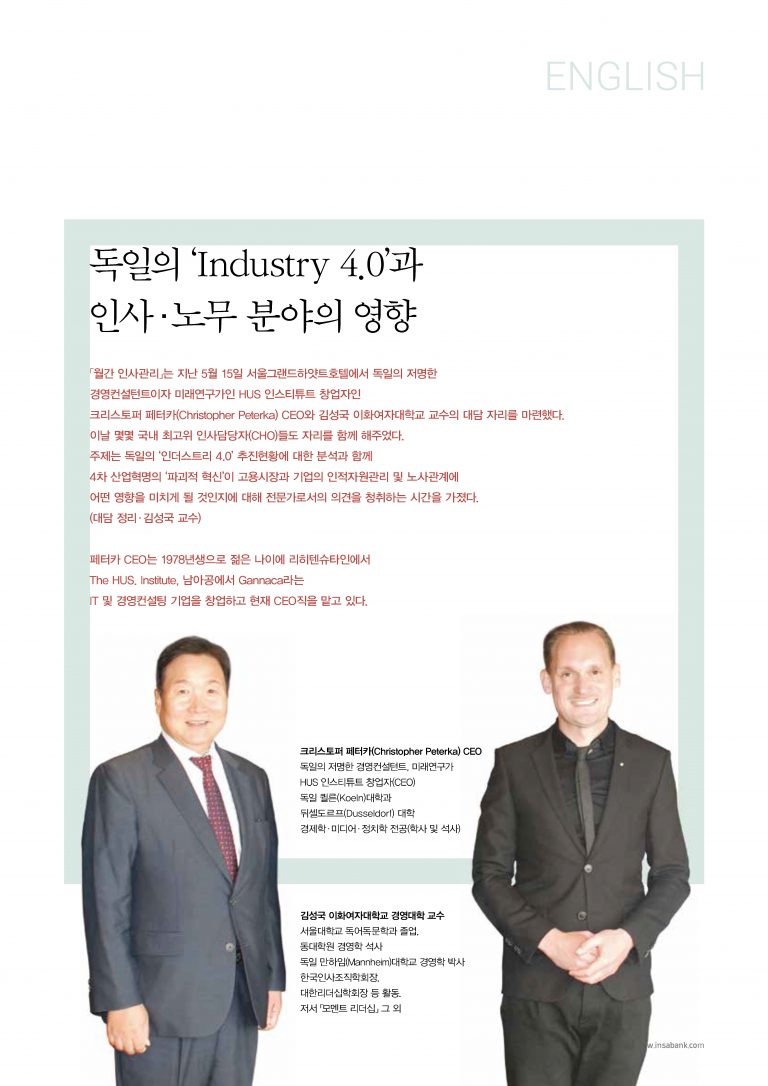 The monthly magazine ‘Insa Gwalli’ (meaning HR management) arranged a talk between Christopher Peterka, a renowned German business consultant and futurist, who founded and manages THE HUS.Institute, and KIM Seong-guk, professor at Ehwa Woman’s
University. Several chief human resources officers were also present. The topics were the current development of the German ‘Industry 4.0’ and how the ‘disruptive innovation’ caused by the 4th industrial revolution would affect the labor market and the industries’ HR management as well as labor relations.

The high art of safeguarding wealth

Where the digitisation leads, the small EU state Estonia already makes clear today. “In no time at all, the country made it into the seven most digitised countries, the D7,” explains digital entrepreneur Christopher Peterka to the asset managers. While still dealing with paper floods – also triggered by the regulation – fight over, even in Estonia even authorities do not want to see paper anymore. Documents and signatures are preferred transmitted digitally and electronically. 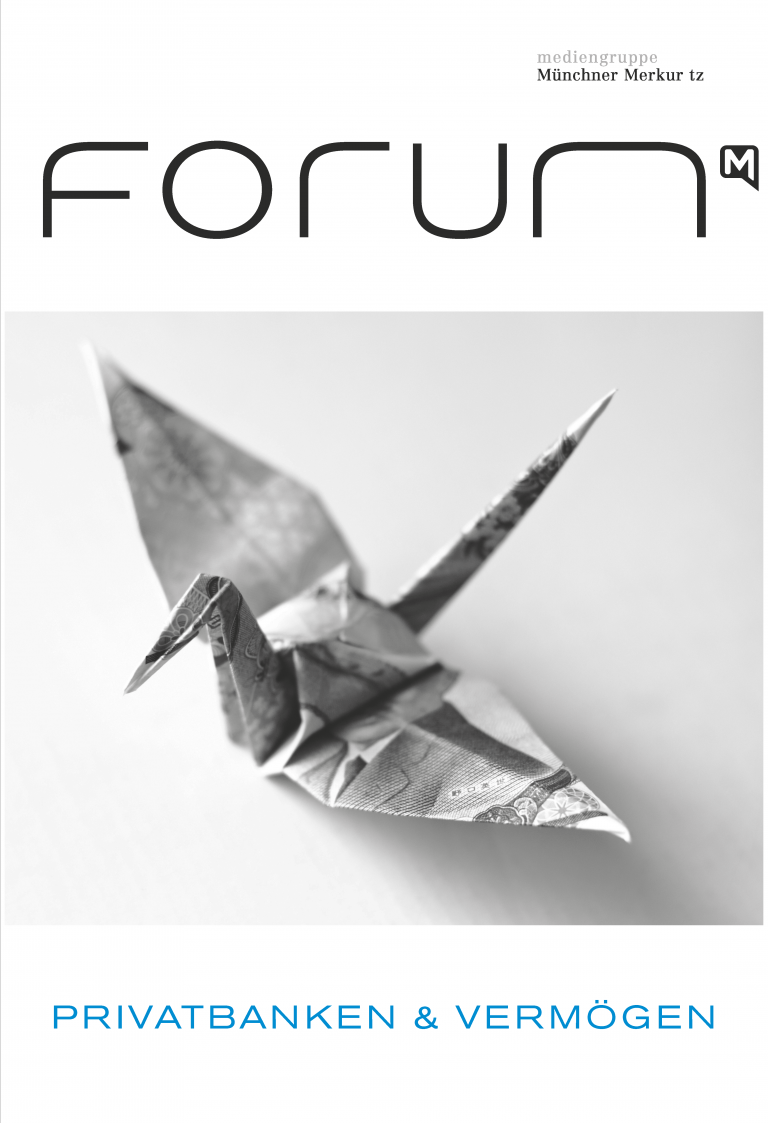 Faster – shorter – cheaper: One thinks to know these keywords from advertising. Their true drama, however, reveal the concepts as basic trends of the present, fueled by a megatrend behind them: digitisation. Of course, it has also hit the banking world for a long time, as the digitization expert Christopher P. Peterka (gannaca global think tank group CEO) explained to the representatives of renowned houses at the Finanzforum “Privatbanken” of the Münchner Merkur tz media group.

The World In Ten Years

As a futurist Christopher Peterka obviously often gets asked about what the world will look like and what we should prepare ourselves for. VIVID as an open minded medium dared to asked questions and did not fear the answers. Take this article as positive inspiration to think about the future that you are already living in and how you would like to design it.

The Future of Law Firms 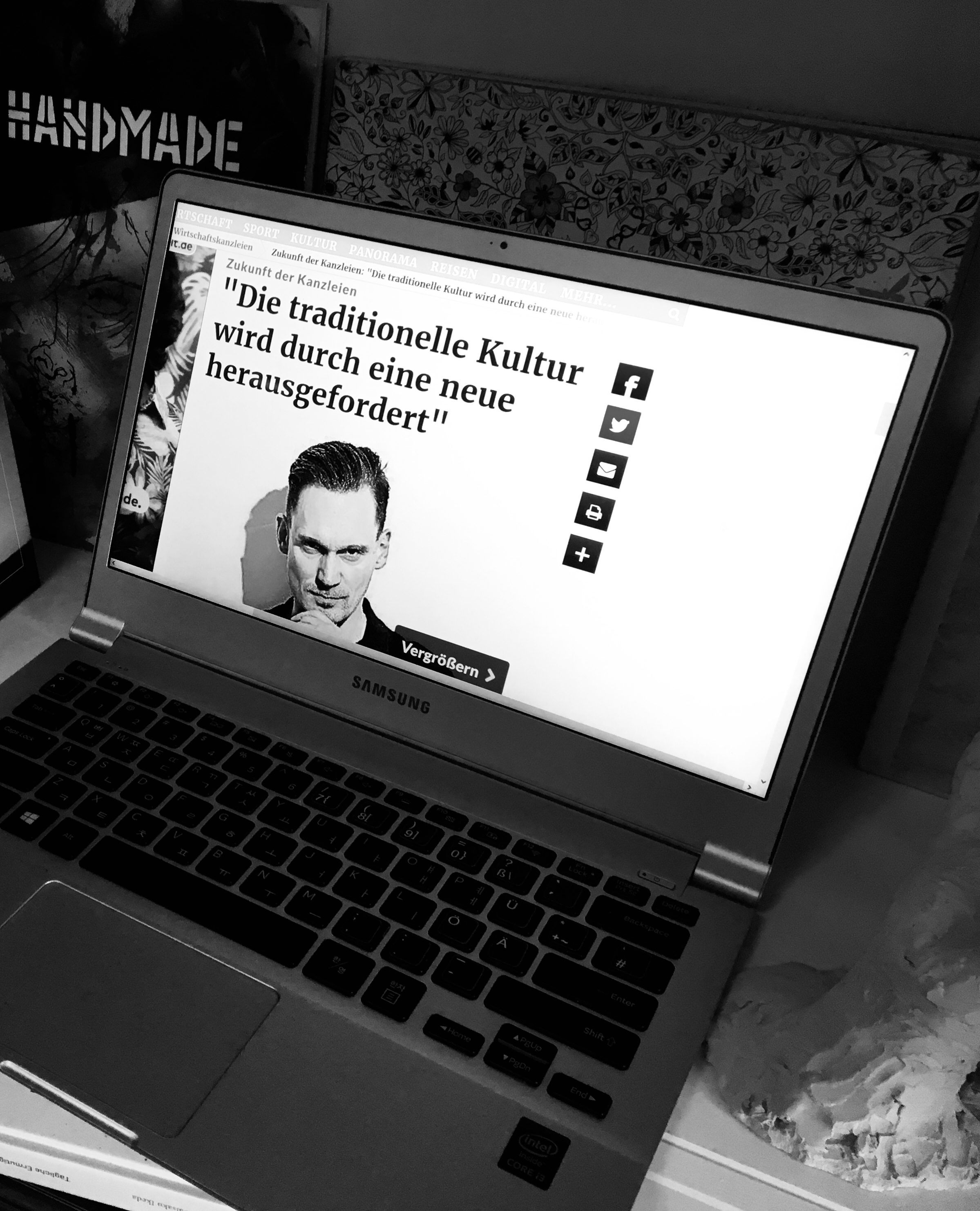 In this article, Christopher Peterka once again passes on the responsibility of adapting to the trends of the Digital Modern to decision-makers within the old structures. Change has already begun. Those who dare to leave their comfort zone now have a good chance of surviving the paradigm shift, While those who hold on to past stability and ignore change will sooner or later be overtaken. 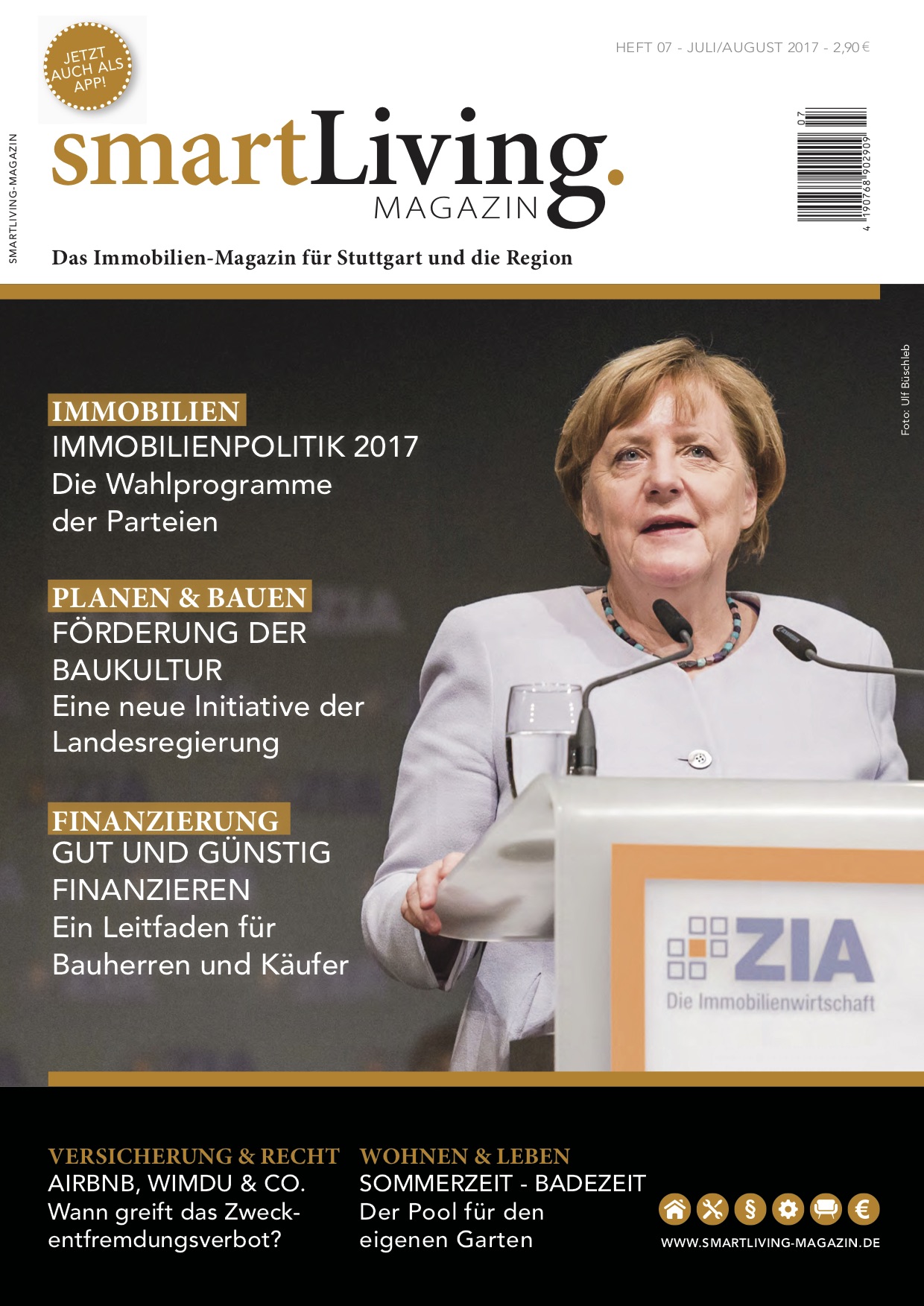 In this interview, Christopher Peterka gives some background information about a truly innovative project named “Cosmo” initiated by our client Orsus GmbH located in Stuttgart, Germany. With this we finally realise something real, something we can touch, and something we can live in. In Germany innovation starts with listening to what customers need, not what they say they want. We are talking high speed internet everywhere, parcel stations, and touchless entry. 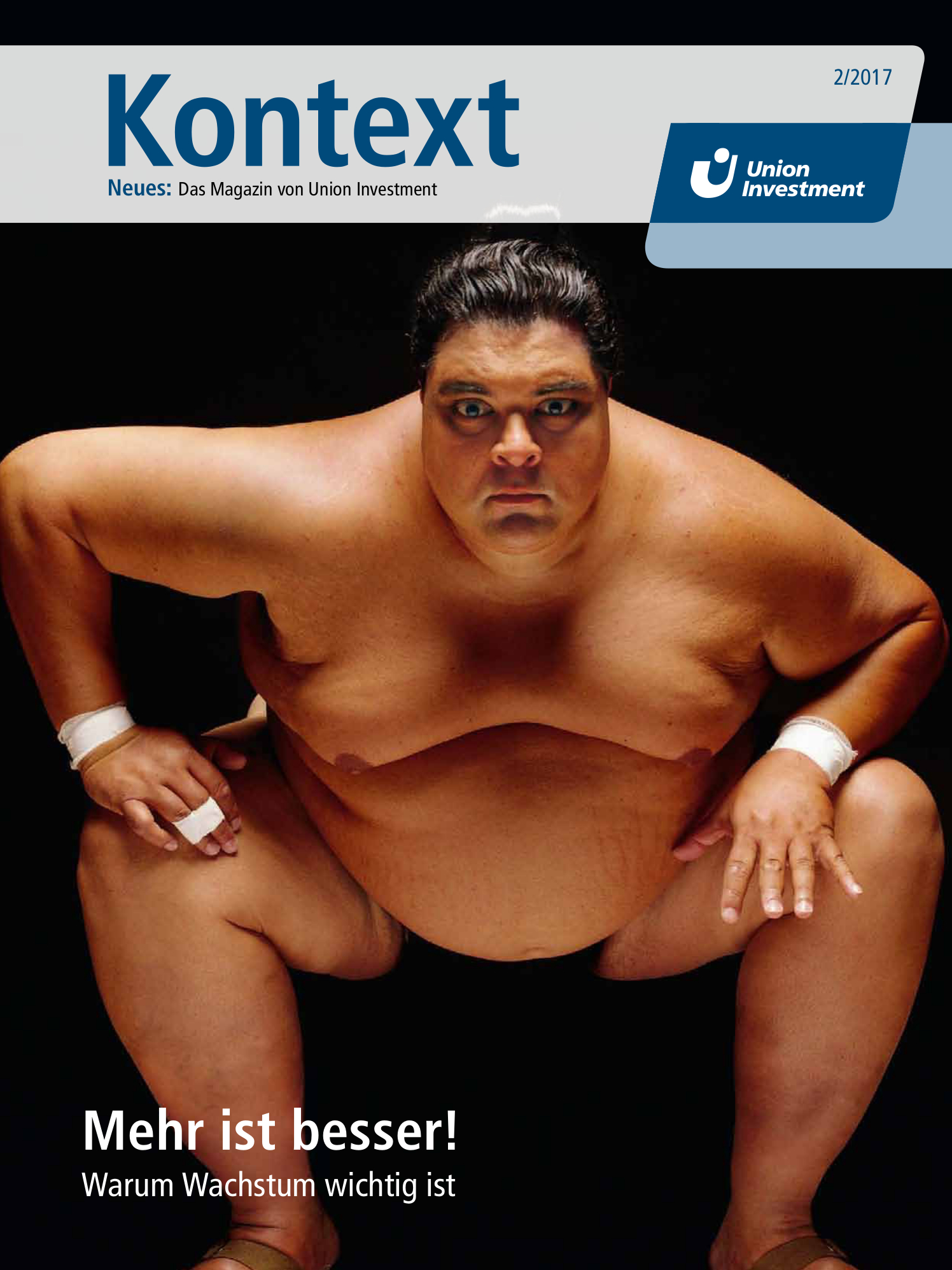 Christopher Peterka reflects on the young generation’s attitude towards the idea of “sustainability”. In his opinion relying on its youth to expect a more sustainable behaviour in business seems rather lazy. He recommends a new openness towards the mistakes repeatedly made by Western countries over the last few decades. 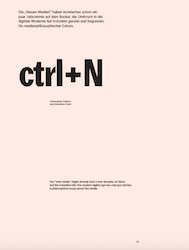 The prognosis that 2015 would be the year of a proper “digitisation-hysteria” among decision-makers totally came true. Yet, the change that results from the epochal transition post-Gutenberg into the Digital Modern Era reaches far beyond what is usually discussed within boards. Myself and Dr. Sebastian Pranz, Editor in Chief of FROH! society magazine have put some thought into this new era’s most urgent questions. We’re excited about any feedback. 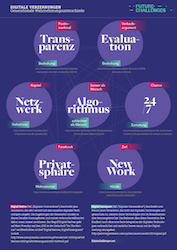 Discussions about “the digitisation” are often affected by the usual fear of change, the lack of willingness to leave our thought comfort zone, and quite a tendency towards premature damnation of innovative instruments and opportunities per se. The figure is intended to help to differentiate the discussion. It sensitises for the rather different perspectives and ways of thinking inherent in diverse generations.

Searching For Evidence In Absence 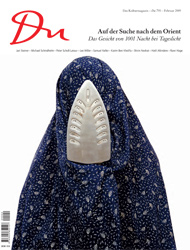 Most cities not only tolerate advertising but actively pursue it. That’s because it’s a lucrative business. Yet Säo Paulo, the biggest city in the Southern hemisphere, banned all advertising from its public sphere as early as 2007. After a series of personal interviews conducted in 2008 locally, I found why this decision might be an interesting indication for a new meaning of public space in the Digital Modern Era. 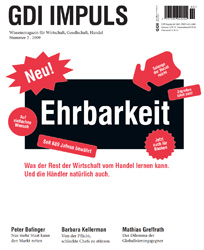 Once an economic system becomes more focused on the staging of its products and services than on the products and services themselves, I think it’s time to start thinking about a “scenographic economy”. If you’re in retail or online (it should be and soon btw) you might like to listen up here. “Stage” as a term has emancipated itself from the art and culture sphere. Our entire existence becomes a stage in the Digital Modern era it seems. “The boards that mean the world” in the sense of Shakespeare are those we stand on 24/7 now.

Sometimes they’re our own – mostly they belong to others. Everything is staged and everybody stages themselves afresh every day.

A Future Scenario In Iceland 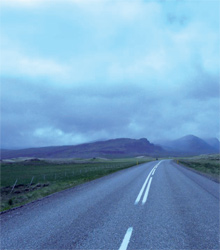 Following the biggest national economy crash of the last 100 years, Icelanders not only had to face the ruins of their once proudly built financial assets but a severe national identity crisis. Yet, simultaneously they had the chance to start from scratch. What happened next was truly inspiring to me and obviously for quite a large number of Icelanders too. A new leadership emerged with a great energy to their actions that could be called “disruptive”, looking at it from today’s perspective. In 2009, I took on a series of netnographic interviews with selected thought leaders and decision makers. This report mirrors some of my impressions. The bottom line: I am genuinely under the impression that Iceland works as a kind of “future lab” for potential future forms that might be adopted by western societies in the future. 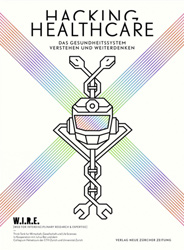 From 2009 to 2013 on behalf of the Think Tank, W.I.R.E., in Zurich, I was invited to participate as an expert in its “healthlab” project. Behind closed doors we discussed the most important challenges and action fields for a future health system with entrepreneurs, politicians, and scientists. As part of a series of suggestions on what to actually do about that future, my concept for a grass-roots democratic think tank became part of the book Hacking Healthcare.

Future Media – Watch And Be Watched 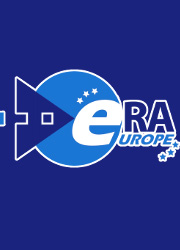 With respect to the ever-rising number of experts attending all sorts of global smart gatherings, the first thought that springs to mind when asked about “the future of media” is: simply more “new media”. Is this plain stupid and naïve? 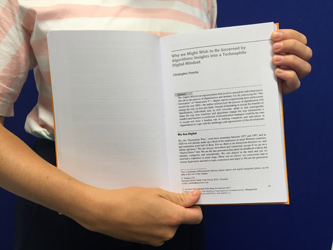 The great German communications science pioneer Prof. Dr. Joachim Klewes has co-published a new book in which he and a bunch of professional colleagues rethink the meaning of corporate communications in the Digital Modern Era. He invited me to contribute a chapter and I happily agreed. I’ve given the question some thought as to what would happen if we actually were rather happy to be governed by algorithms …? 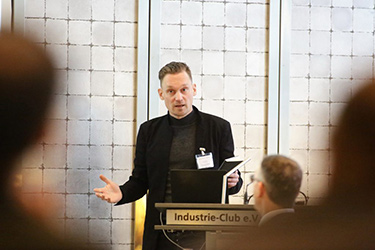 Digitisation means much more than applying technology, such as legal tech. Creating an innovative workspace that fosters interaction productivity and serves as a platform for encounters across disciplines, for example, is an important key to the transformation challenge. 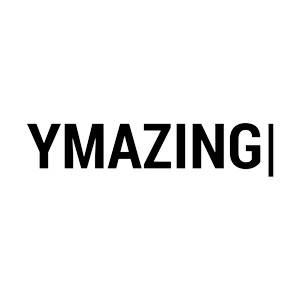 “Human Leadership is going to heavily rely on data. I think that leaders need to understand data and the power that comes with decoding and exploiting it appropriately […]”

“Your choice”: with progressive optimists to system change 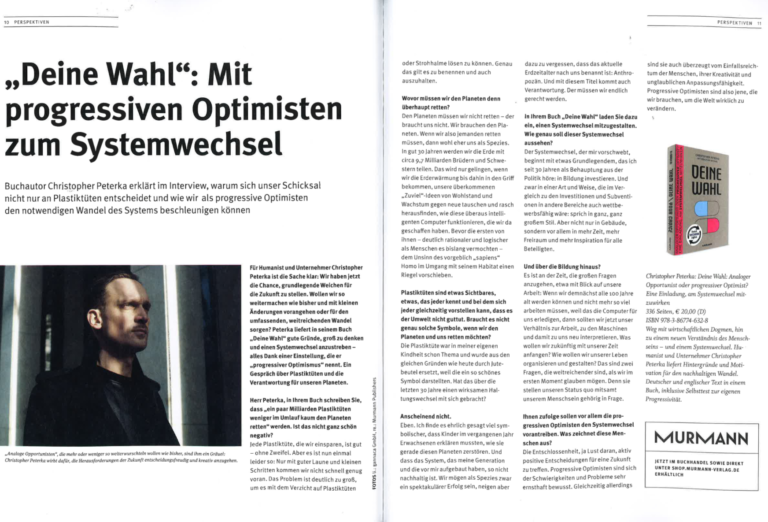 We don’t have to save the planet – it doesn’t need us. We need the planet. So if we have to save anyone, it’s more likely to save us as a species. In a little over thirty years we will share the Earth with about 9.7 billion brothers and sisters. That will only happen if we get a grip on global warming by then, swap our old “too much” ideas of prosperity and growth for new ones, and quickly figure out how these highly intelligent computers work that we have created.

How does a company
future-proof – and what makes them to
Dinosaurs or even parasites? 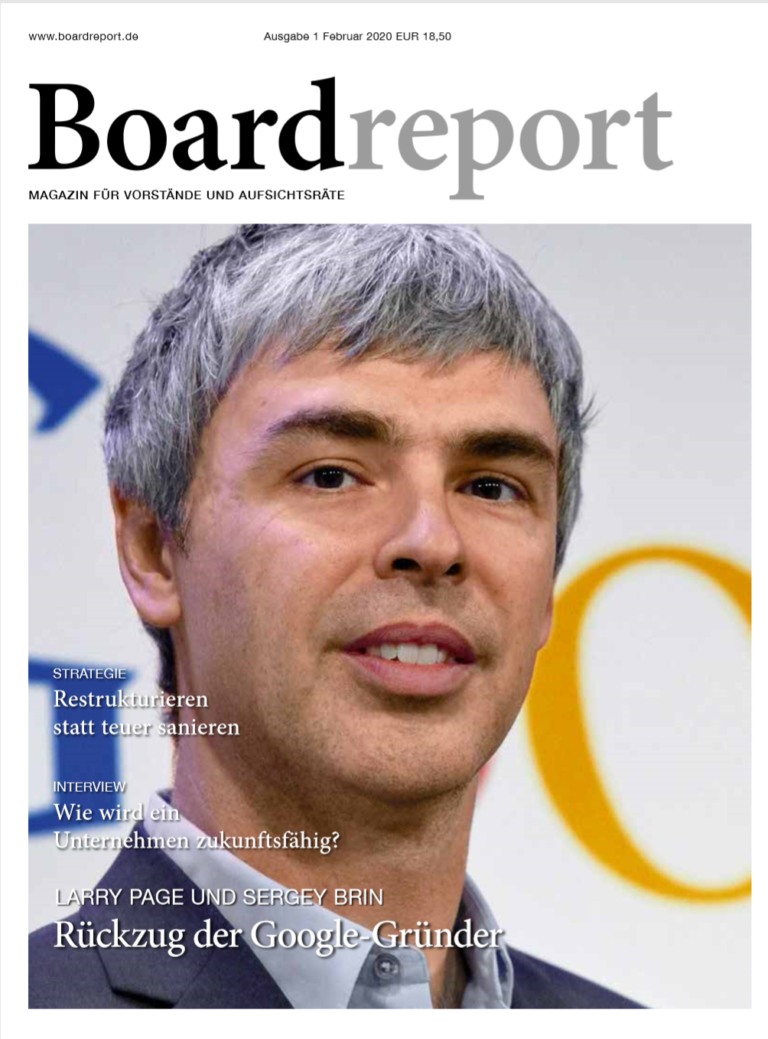 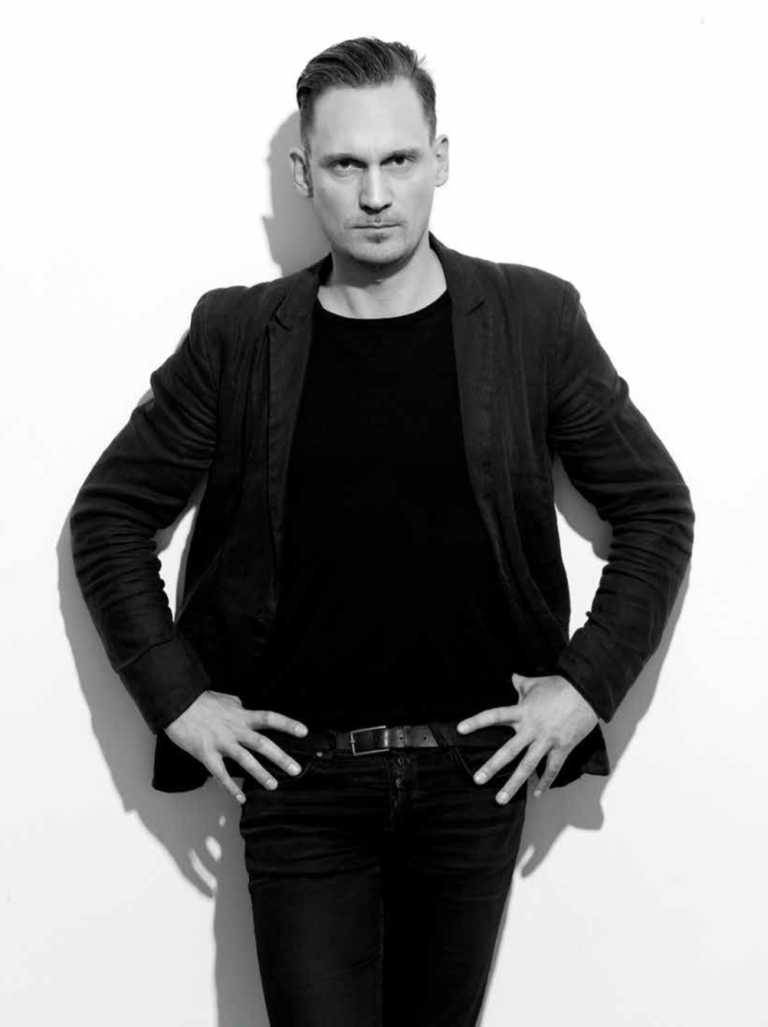 “I am a convinced father, human and European. As such, I need to remind myself to obtain this wonderful place in the world. However, to do this we urgently need to maintain our Eurocentric correcting view of the world and adapting it to demographic and political realities on our planet – otherwise we will,

…in a global perspective, passed on to the back…
and end up as dinosaurs or even parasites.”